About The Half Man Half Biscuit Lyrics Project

“At HMHB gigs, they wear their hearts on their sleeves. And their oven gloves on their hands. But this loyalty isn’t only articulated through the redesign of kitchen-based protective wear, as a glimpse at the internet will reveal. One fansite consists of full transcriptions and in-depth analysis of every Blackwell lyric ever recorded. The site goes by the attractive strapline of ‘179 Pop Songs Picked Over By Pedants’. My kind of people.”

Chris Rand (AKA here as “Chris The Siteowner” or “CtSO”) writes:

Trouble is, like darts in soap operas, most of them are so wrong. So with too much time on my hands, obviously, I’ve been trying to rectify the situation, and not only build a complete set of lyrics, but actually get them right (mainly powered by the comments and corrections of many other fans, for which I thank you). The original effort took just over three years, then we had a new album, and another, and… well, let’s hope the job is never finished.

Of course, these lyrics are the copyright of the songwriters, and if they or anyone else has any objections to this non-profit-making site, please contact me and I’ll remove the offending material immediately.

But where should you begin? Right here:

A Beginner’s Guide to Half Man Half Biscuit

Half Man Half Biscuit have been steadily making music since the mid-eighties. Whether you’re new to the band, or catching up with them after many years, a cracking place to start is this 2011 article by Taylor Parkes on The Quietus. Go and have a read. We’ll still be here when you get back in a few minutes.

That should have given you a decent flavour of what the band is all about. But if you want more, watch this seven-minute video made as part of the “John Peel’s Record Collection” series, introduced by the great man’s wife Sheila:

On to the music!

With so many good songs to choose from, there’s no definitive place to start catching up with thirty-something years of Half Man Half Biscuit. Perhaps the best place to start would be the fans’ favourite songs. The latest poll was in 2019, under the guise of the Lux Familiar Cup. Here’s the result of the poll to choose the top 32 songs, which had nearly 400,000 votes from 1,700 listeners. And here’s what happened when we set the top 32 up against each other.

And here’s everything, on Spotify:

For lots of complementary stuff to this site, I’ll direct you to Gez’s long-running ‘HMHB Home Page’, where you can also spend hours. And if you found the Taylor Parkes article above interesting, here are loads more from the likes of Kevin Sampson, Julie Burchill, Ben Myers, Peter Ross and Robert Bathurst.

And what about this site?

As the name implies, The Half Man Half Biscuit Lyrics Project is focused on the lyrics to the songs, but in the process it’s also become the most active discussion site on the band. Work your way through our home page if you want to see everything we’ve got to offer. In particular, it’s worth investigating:

The fans seem to generate as much curiosity in the media as the band, although neither amounts to much, which may well be a good thing in the long run. The most recent major article was in The Guardian in April 2022. Enjoy: 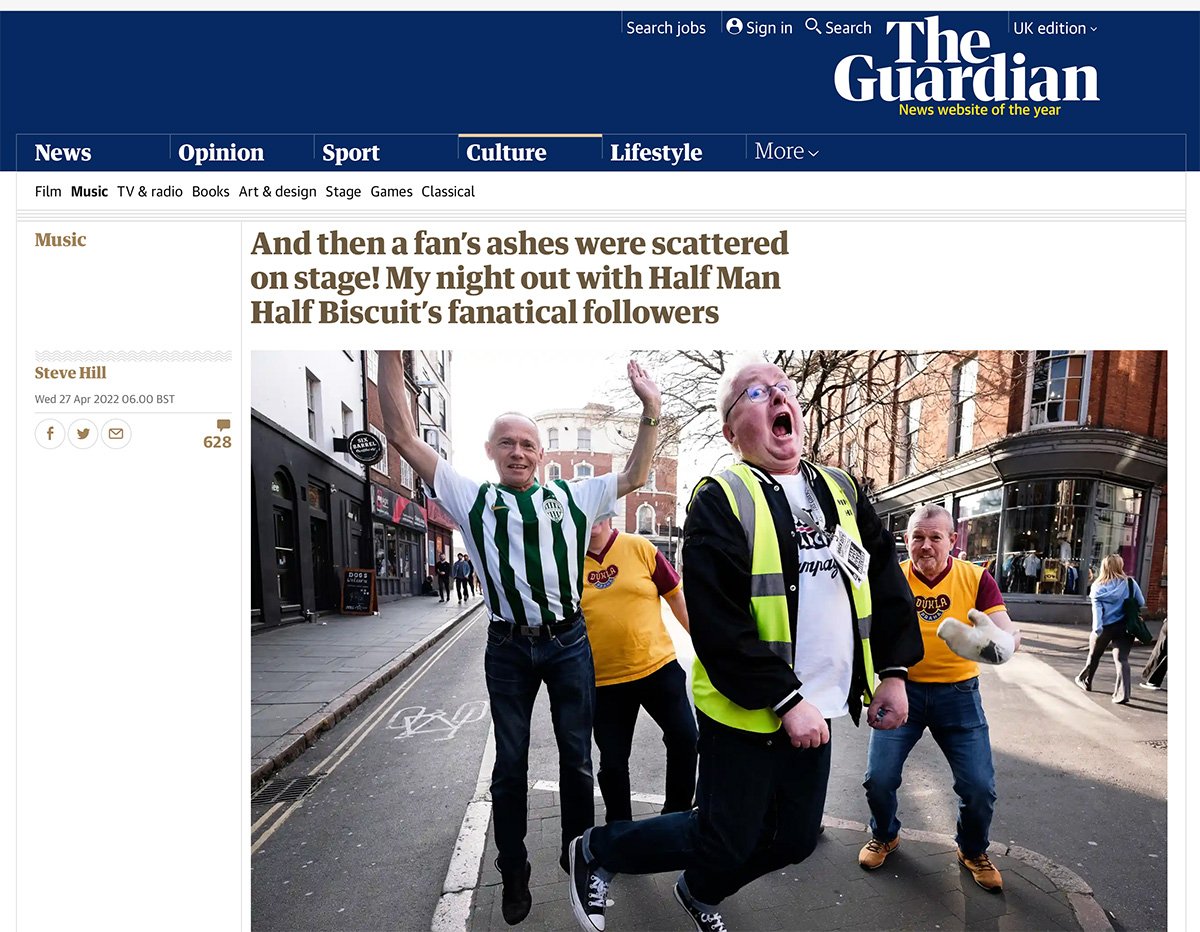 Oh… and buy the music!

You can buy Half Man Half Biscuit CDs and other merchandise at the online store spun off from their former, long-time record label Probe Plus. The 2022 album “The Voltarol Years” will be available at all good independent record stores. The music is also available at all the normal download sources too.

And if you do buy the records, you’re in a small but select group of wonderful people. Here are the high points of Half Man Half Biscuit’s 35-year UK album chart career: 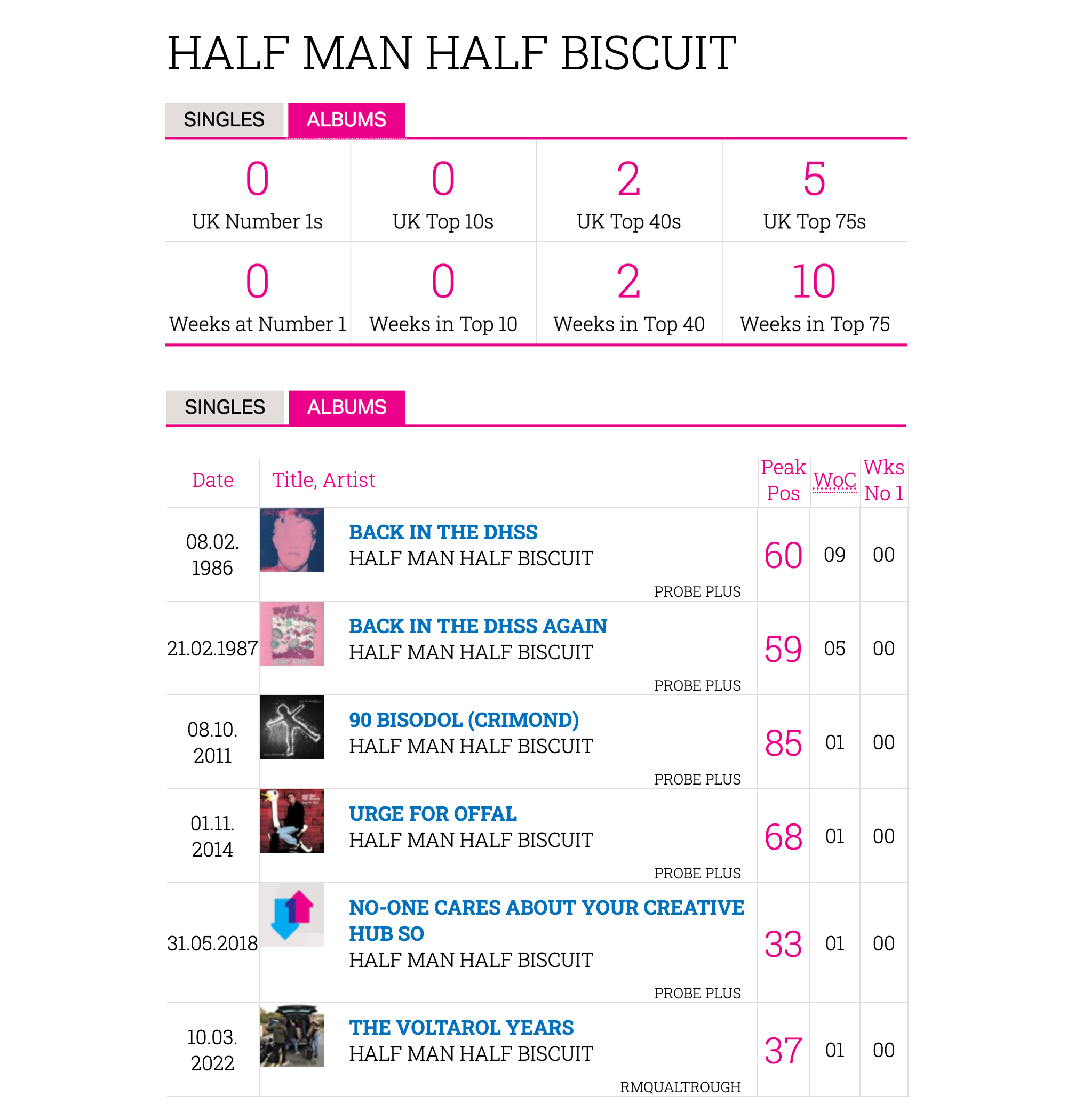 Welcome to the world of the band of which John Peel said:

“In a decently ordered society members of Half Man Half Biscuit would be routinely carried shoulder high through the streets of every city they visited.”

(Disclaimer: I’m not some sort of uber-fan: you can find the real ones at any of the band’s gigs. They’re all charming people. All I have is a love for the band and limited ability in website design. Oh, and I have a friend with a son called Archie, and another with a son called Fred. I have been caught wearing a footy shirt over a jumper. I’ve bought soup in cartons. And I know who PFM are. But I do live quite near Chatteris. Which is nice. You can judge me on my musical taste by seeing what I listen to, right here.)

Feel free to link here from your own websites. Thank you to the likes of The Guardian, The Irish Times, The Quietus and the late Word Magazine for doing so. And all the social media mentions you can manage will help spread the word.

Gigs are now handled by Pod at The Gig Cartel: More details here.

If you’d like to be added to our mailing list for major announcements (and they’re very rare, maybe once or twice a year), then stick your details here: